Taking over 100 years of industry experience and turning it into a masterclass in artisanal perseverance and fine French craftsmanship, Paraboot is celebrated for its structural silhouettes, authentic detailing and anticonformist attitude.

An original silhouette from the Paraboot collection, these iconic Veley derbies are now available for women - same famous leather construction, just in smaller sizes.
See all the designer Derbies selected by L'Exception
This product has been labelled The Smart Choice

Produced in France : This product was crafted in France, with at least 50% of the total cost of production earned by French industry.

It all began in the late nineteenth century in Izeaux, a small village at the foot of the Alps. Rémy-Alexis Richard, born in 1878 into a humble farming family, became a semi-skilled cutter at Chevron, one of a score of shoe factories in this Isère village. These factories received orders from contractors "in the city", bought the leather, cut it and had the pieces assembled by farming families at home in the surrounding hills, before fixing them (by nailing or sewing them) onto wooden or leather soles, depending on the product in question. Rémy Richard soon realised that these contractors from the cities earned more money than his own boss, and decided to try his luck; he went up to Paris with the designs for his own models to sell them as a "factory agent". His plan worked! Rémy had "his" first shoes manufactured by the factories in Izeaux – including the one he had just left – and sold them to the "major" clients in Paris. In 1908, he began to hire his own staff.

Rémy Richard registered the Paraboot name in 1927, from "Para" – a port in Amazonia, where the latex was exported from, and "boot" – the interesting new shoe he had discovered in the United States.

The centenary celebrations marked one hundred years’ worth of outstanding industrial and commercial endeavours, highlighting the commitment of a family whose history forms part and parcel of the brand. Four generations have headed up Paraboot through a history characterised by repeated reinvention, whilst always staying on course. From the outset, the watchwords have been innovation, artisanal knowhow and workmanship.

The model wears the size 3.The product fits normal, we invite you to choose your usual size.

Free express delivery by DHL to Japan for any order above 200€. We take care of all additional costs including duties and taxes. You don't need to pay anything more when you receive your package.*

* Except for France DOM/TOM and Russia : order will be shipped by French Post. Detax is applied on all prices shown.

From the same designer

Customers reviews about this product

Thank you, we will contact you when this size is back in stock. About our loyalty program

GAIN POINTS ON EACH PURCHASE AND SAVE ON YOUR NEXT SHOPPING EXPERIENCE.

The vouchers are valid on the new collection, except promotions, sale and outlet for a period of 30 days, with a minimum of purchase of 100€. Points can not be reimbursed.


The product is added to your basket :

Why can't I add two different sizes in my cart ?
L'Exception distributes products in limited quantities. In order to limit our carbon emissions, we would rather have you choose your favorite size, and avoid an unnecessary return of merchandise. In case you really need to add two sizes in your basket, contact our customer service at the address : serviceclient@lexception.zendesk.com.
See your cartNew ! Pay in one clic with Amazon Pay

Also bought by our clients 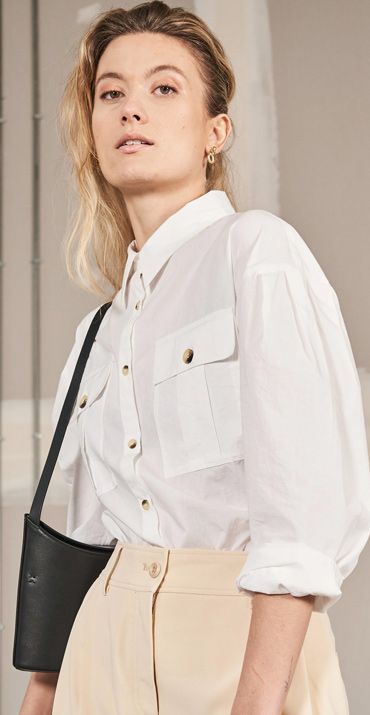 Choose the cookies you want to activate or refuse.